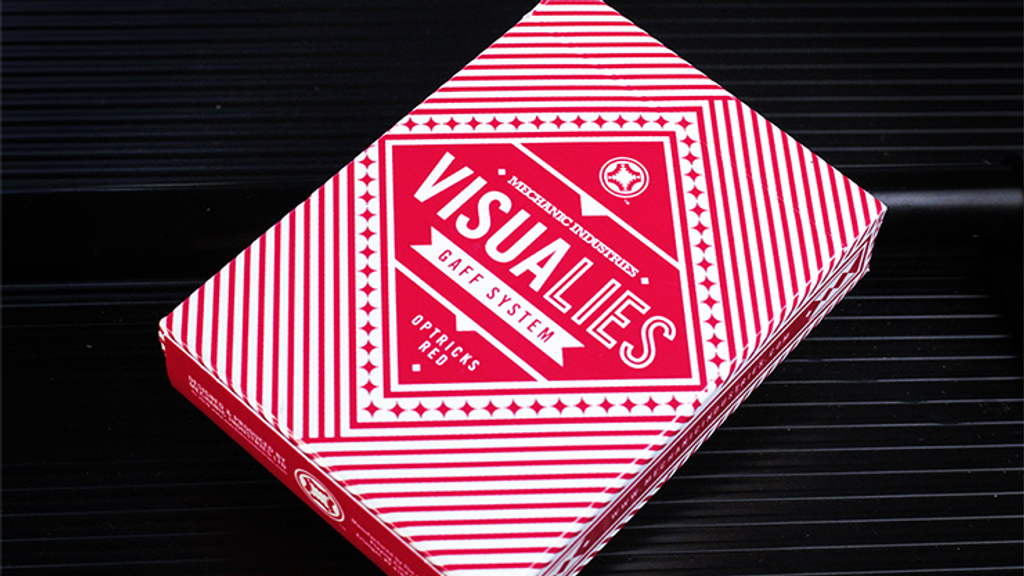 It's the perfect extension of the Optricks Red Deck. Contained within are 17 core concepts with our trademark visual style.

Even the tuck case is a gaff! This allows you to display an impossibly looking empty box before producing a full deck of cards from within.

Show the Queen slowly fading through the deck or magically materializing. Do a color change to show that she sinks directly into the deck before moving on with your Anamorphic routine.

This single card will allow you to show the coin drop through the deck before finding a selected card or popping out the bottom.

See-through deck effect! Place a coin on your hand, then the deck on top. Instantly you see through the deck before the coin vanishes.

So many sleights are available that will allow you to spin the Queen and it looks like the card melts and warps around! Give it another twist and it goes back to normal.

A sandwich routine with a transpositional twist. You can casually spread the sandwich both ways and the 6 remains hidden. The 6 of Diamonds was chosen for this, as it is the easiest card to recognize in the spread.

2 distort effects create the illusion of you peeking behind the curtain, revealing the Queen in a dramatic fashion.

Allows the magician to perform a Torn & Restored routine without trashing any cards!

Do a simple color change and smash the Queen to pieces.

Split the 4 into two two's as the size changes as well as value! Then take the two twos and in an instant, they transform into the four Aces, once again shrinking in size to match their value.

Based on the same concept as 4xFour, we've extended this to offer 3 cards that allow you to half, then half again in size.

Based on the classic Twisting the Aces. A few double-facers and a special 'spread' gaff make this sequence achievable for any magician.

Use your favorite force with the Queen of Hearts or 4 of Clubs, then show a strange looking card that is just a jumble. Hold it up and just blow or twist, the card spins and magically reveals the card they were just thinking of. A simple shake and the strange card now becomes their selected card.

'OFF WITH HER CLOTHES'

Show the Queen, then in a flash, cause her clothes to jump off onto another card!

Carefully thought-out handling and full Triumph routine included. Uses the Queen and 4 again so is also a great card to experiment with and link with the other gaffs -- lots of possibilities.