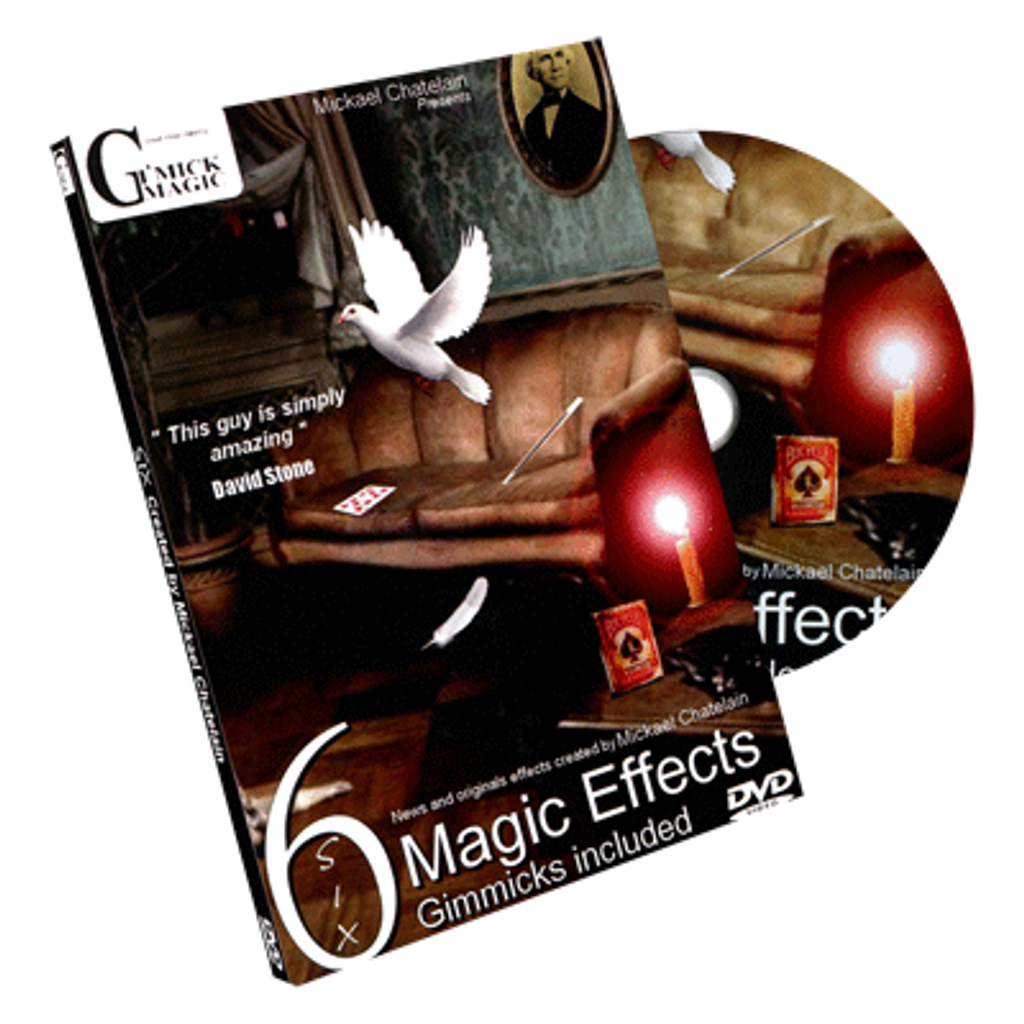 Six (All Gimicks plus DVD) by Mickael Chatelain - Trick

$ 40.73 USD $ 0.00 USD
Share 0 Tweet Pin it 0 LINE
The DVD will teach you to easily make the necessary gimmicks to present the 6 routines included on the disk. Follow step by step the making of each effect and how to present each one under real-life conditions. It's a course in magic in your home, a lesson in creativity from the gimmick specialist !

All the necessary raw materials for making the gimmicks are included with the DVD. It will take just a few minutes to assemble and personalize your gimmicks. Putting them together will become child's play.

Let's take a look at detailed descriptions of the six effects included in the DVD :

Effect #1 : " RBR " Rubber Band Ring
Bringing a simple elastic band and a borrowed ring towards each other, the ring interlocks with the elastic band in full view. At the end of the routine the ring and elastic are handed out for examination. Both are ordinary!Effect #2 : Tic Tac Box
A perfect routine for children. Show a simple box of Tic Tac's. Open it in front of the spectators. They'll note that there are only two Tic Tac's inside. Shake the box in front of their eyes and, believe it or not, your spectators will see the box magically refilled. Open the box and dump a handful of candy into your hand and give some to your spectators -- REAL candy for a REAL mystery.

Effect #3 : Autoreverse
Give each of your guests a playing card and ask each of them to do exactly as you do. Although there's only one card, your spectators will not be able to imitate you. A veritable conundrum, a puzzle for your spectators but simple for you. A new, updated version of the effect, "Do as I Do." Effect #4 : Color Card
Learn how to put together an instantaneous, full-view color change! Effect #5 : Jump Card
A rapid and visual card sandwich! A spectator freely selects a card that is then signed and lost in the deck. Take out the two red kings, for example, and place them slowly and visibly in the center of the deck and ribbon-spread the cards. In the middle of the spread the two kings are still visible. Invite a spectator to verify that no card is hidden between the two kings. However, in one second the chosen card LEAPS and is found sandwiched between the kings, still in the center of the deck! Effect #6 : Ghost Coin
A penetration of matter through matter that's so clean it could only be magic! Borrow a coin and have it signed. Place the coin in full view on the table. Place a card on the coin. NOTHING in your hands, NOTHING to hide. Rub the center of the card with your fingers and, believe it or not, the coin is now on top of the card. Show the card on all sides and hand the coin out for examination.
×
Your cart is currently empty.
Continue shopping