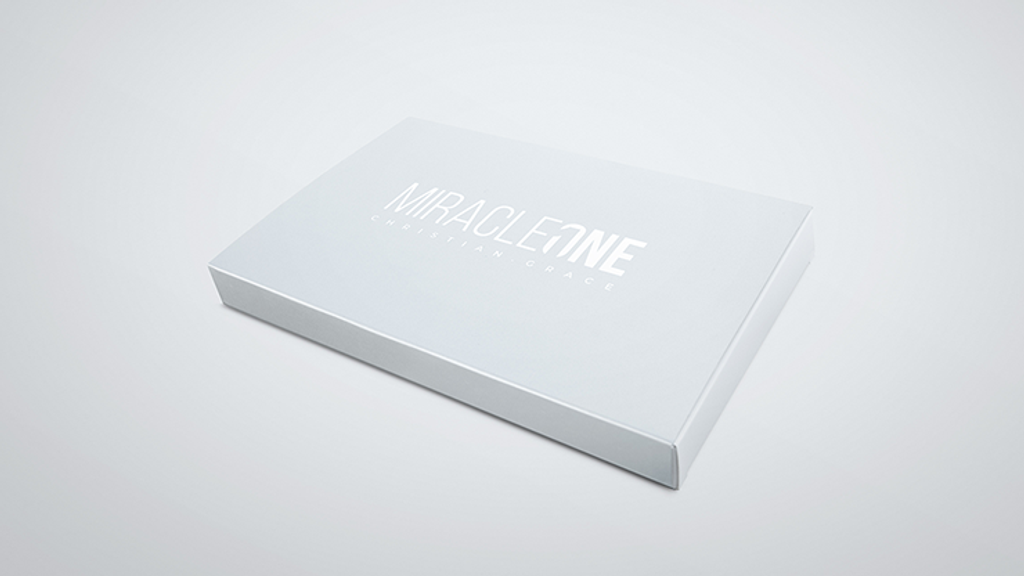 Presale: Miracle One (Gimmicks and Online Instructions) by Christian Grace

"Miracle One" by Christian Grace and Vanishing Inc. is an incredibly creative take on an idea magicians have obsessed about for decades. It is one of the most deceptive ways ever offered for having a chosen card appear at a freely-selected number in a deck of cards.

"Miracle One" is Christian Grace's contribution to the "Any Card at Any Number" plot. He held it close to his chest for many years. Until one day when he decided to post a video online of a performance. Magicians were dumbfounded. They couldn't believe it didn't use a stooge or some sort of camera trick and clamored for Christian to release it.

Check out the full performance of "Miracle One" in the trailer and you'll see why.

What is "Miracle One"?

"Miracle One" was designed to be a very fair and clean "ACAAN-style" effect that works every time. All without any complicated sleight of hand. This amazing effect is within the reach of any magician.

Your spectator takes one of two decks of cards and shuffles it. They then select a card while the deck is still in their hands. This prediction is placed off to the side. You never need to touch or switch it.

They are then asked to name a number and deal down to it in the other deck of cards that has not left their view since the start of the trick. The card at the number they freely picked is revealed to be the same card they selected from the other deck. A truly impossible perfect match.

No difficult sleight of hand

Your "Miracle One" set includes two decks of cards. A gaffed blue deck and a normal red deck with a few extra replacement cards. You also get a detailed instruction video where Christian gives you every detail needed to perform "Miracle One" with confidence.

What is the difficulty level of "Miracle One"?

You don't need to practice any difficult sleight of hand to start performing "Miracle One." It is well within the reach of any magician. There is a tiny bit of memory work required, but a crib is also included so you don't have to worry about forgetting or getting lost when performing.

Is this a true ACAAN?

In the interest of transparency, Vanishing Inc. would like to note that "Miracle One" is technically a CAAN (Card at Any Number) effect. However, the way your audience will perceive it is as fair and straightforward as a true Any Card at Any Number effect.

They shuffle the deck and force the card on themselves in their hands. So, they will never suspect that they had anything less than a totally free choice of any of the 52 available cards.

Can they name any Number?

As far as the audience is concerned, they can freely choose any number. Christian's super clever construction of the effect and scripting allows you to easily guide them into the necessary range of numbers needed to make the effect work. It is a large range and the way you subtly influence them is completely natural and goes by unnoticed.

So, technically, they can't name some of the largest and smallest numbers. But, they will never even think to do so. The use of this particular range also plays a key role in selling the fairness of the overall selection process and ultimately makes the trick stronger.

Will my performance always look like the one in the trailer?

With "Miracle One", their chosen card will always appear at their named number. This experience never changes for the audience. The only thing that varies slightly is minor tweaks to the method used to achieve it based on the scenario.

The card selection process remains identically fair in every performance. It happens in their hands. They shuffle, they cut and they pick a card. You don't need to touch the deck and, in the very rare times that something goes different than planned, Christian has developed an out that rights the ship quickly without anyone noticing a thing.

Your spectator will also always be the one who holds the cards and deals to their number. In some scenarios, you may need to take the cards out of the box and possibly deal a few cards first as an "example" before handing it to them. But they will always be the one that deals down to the card at their number. This removes any possibility in their mind of you doing anything sneaky.

Can I repeat this effect?

"Miracle One" was created to be a closer or a showstopper that you use when you really need to wow an audience. It cannot be repeated for the same audience but, it's so powerful and fair, there really shouldn't ever be a reason you need too.

So is this just a deck filled with a repeating bank of duplicate cards?

Nope. Zoom in on the trailer. You'll see the spread has all different cards.

"Miracle One" is an original effect made possible by layering a novel combination of methods that make it incredibly fair and essentially impossible to backtrack. You may recognize the inspiration for the core idea from two amazing effects: Mike Rose's "The Grail" and Adrian Vega's "SCAANDAL". These creators not only offered full support for "Miracle One", but also added additional praise for Christian's creative evolution of this concept.