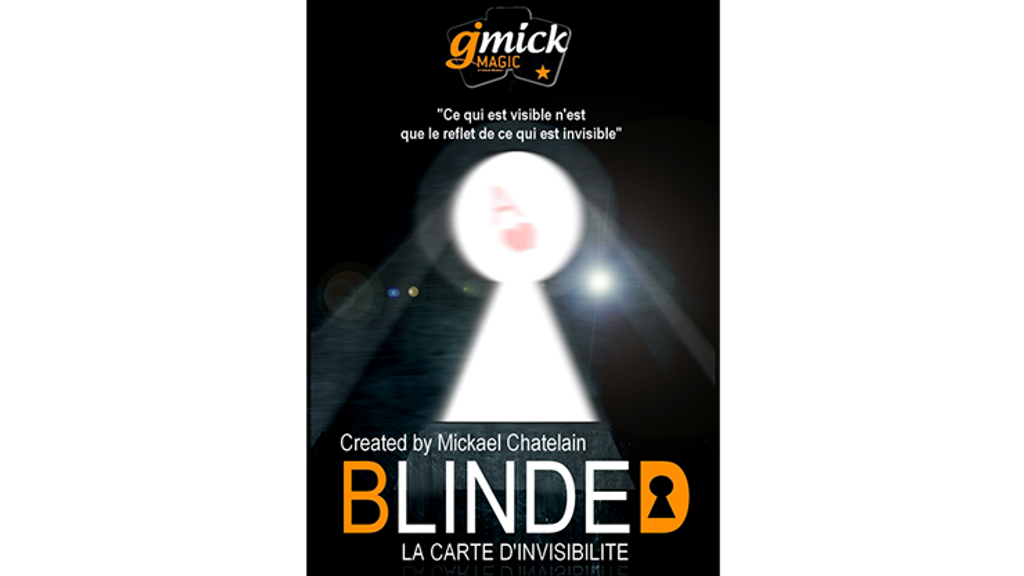 Conceived in 2016 by Mickael, BLINDED will seem like trick photography!

But imagine presenting this illusion LIVE, in front of your spectators and just a few centimeters from their eyes...

BLINDED will fool everyone who sees it!

Here is the exact description of the routine:

Take a blank card, the card of invisibility, out of your pocket.

This card has an enormous keyhole cut in its center allowing everyone to see through it.

Under this keyhole, the word "VISIBLE" is written.

Aside from this card, you don't need anything else...

Invite your spectator to freely choose a card from your deck.

Explain that this is normal because the word VISIBLE is written under the keyhole.

Your spectators don't understand where you are going with this, because everything is reasonable, there is nothing magical at this point.

Now take the card from your spectator and show the other side of the invisibility card!

This time, your spectator can read under the keyhole the word "INVISIBLE".

Place your spectator's card again behind the invisibility card and there, in front of his eyes, his card is now INVISIBLE!

Yes, you read that right! You hold the invisibility card between thumb and forefinger and your spectator sees perfectly through the card thanks to the huge keyhole!

No optical illusion or the like! The spectator's card is truly INVISIBLE!

Is your spectator incredulous?

Then slowly remove the invisibility card to make the chosen card appear again!

You've got to see it to believe it! Repeat this incredible experiment again and again! Each time the spectator's card will become INVISIBLE.

From the magician's vantage point, it is impossible to describe this situation; it's just that odd!

At the end of this experiment, give the card back to your spectator so that he can examine it at his leisure! It is an ORDINARY card!

The keyhole is huge and your spectators will easily see that nothing can hide behind it!

The illusion is insane! You're going to fool yourself!

A new mechanism for this kind of effect is at the root of this diabolical secret, you'll love it! Nothing to hide in your hands or anywhere else. You hold the invisibility card between thumb and index finger, and that's it!

Delivered complete, ready to be presented.